Predictive Testing for HD involves informing an "at-risk" individual of the presence or absence of a genetic abnormality which may give rise to HD in the future. Proposed eligibility criteria will include being over 18 years of age and at high familial risk (family history) of HD. 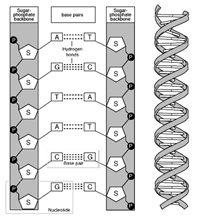 All our characteristics are inherited from our parents, half from our father and half from our mother. The "blue-print" for these characteristics is carried in tiny rod-like structures called chromosomes, present in every body cell. We each have 46 chromosomes that are arranged in pairs, one member of each pair having come from our father and the other from our mother. Each chromosome carries hundreds of genes. Each gene produces a substance that performs specific tasks. When one or more of those vital substances is missing or changed, a genetic disorder arises.

Genes are too small to be seen even with the most powerful microscope, but scientists are beginning to learn on which of the chromosomes genes are situated. Still the presence of an altered gene is usually known only when a genetic illness develops. All chromosomes (and therefore genes) are in pairs, one member of each pair inherited from each parent at conception. When a parent's chromosomes split in half and are passed on to a child, it is a matter of absolute chance which member of a pair is passed on.

This means that a particular sequence of three nucleotide pairs (CAG) is repeated several times. When this gene is normal, the trinucleotide sequence repeats are equal to or less than 26. In HD, the number of repeats is much greater being more than or equal to 40 trinucleotide repeats.

On March 1993, a team of scientists announced that they had isolated the gene for HD and identified a mutation which causes the HD gene to differ from the normal gene. The nature of the defect, a duplication of a piece of DNA, can be used to predict whether the individual will have HD.

This discovery completes a trail of research begun a decade before when the same scientific team found the location of the HD gene on chromosome four. This discovery led to a pre symptomatic test for HD and intensified efforts to find the gene itself. Many groups participated in the research and provided information that proved vital to the final isolation. The discovery of the gene does not, of course, signal the end of HD as a health threat. However, with the discovery of the gene several important implications follow:

More research is necessary to establish whether the repeat number will eventually be useful in predicting age of onset. Current understanding is that the normal gene contains 26 or fewer CAG repeats, while the disease causing version has 40 or more repeats. There is an intermediate range: specifically, individuals with 27-35 repeats on one of their two genes will not develop HD themselves, but in rare instances can pass an expanded number (i.e. 40 + or more) of CAG repeat to their offspring, who will then be at higher risk for HD. In addition, a gene with 36-39 repeats falls into "reduced penetrance" range, which may or may not be associated with the onset of HD symptoms.

HD is an autosomal dominant disorder; this means that each child of a parent with HD, regardless of sex (autosomal), carries a 50 per cent risk of inheriting the HD gene; and only one parent who is a gene carrier is necessary for the gene to be transmitted (dominant). It does not mean that half of a couple's offspring will develop the disease, or that every second child will develop the disease. It is like tossing a coin. Each time the coin is flipped; there is a 50/50 chance of landing either heads or tails. Therefore, it is possible that none of the children may be affected, some may be affected, or all may be affected. Each child of an HD affected parent faces the same 50/50 chance that he/she will inherit the HD gene, regardless of his/her siblings' inheritance.

Predictive testing is a test to determine future risk of a hereditary disease. In HD, this means that if someone is found to be carrying the faulty (HD) gene they will develop the disease at some stage in their life.

The Predictive Testing program in Western Australia is based on guidelines that were drawn up by the World Federation of Neurology in conjunction with the International Huntington Disease Association.

In Western Australia, the program at the Neurosciences Unit begins with an initial information session with the Social Worker and an appointment with the Geneticist for a genetic counselling session. It is explained how the test works and what is involved, what the result means when it comes, and blood is also taken at that appointment.

Applicants are then offered an appointment with a Neurologist at the Neurosciences Unit, who examines people to confirm that they are not symptomatic.

This appointment can be quite an important stage in the process of predictive testing. If the person does have a gene positive result it is important that they understand that it does not mean they have the disease in the here and now, but that they will get it at some stage in their life.

People are seen for at least one or sometimes more counselling sessions with the Social Worker, Psychologist, or Psychiatrist depending on their needs. It is a time to really focus on the pros and cons of having the test and what the implications may be in various aspects of their life. The result is then given by the Social Worker at which time it is also scheduled a follow up session a week later, for a debriefing.

In Western Australia, predictive testing is free of charge to the individual. The service is funded by the Health Department in conjunction with the King Edward Hospital Department of Genetic Services and the Path-Centre at QEII.

Some of the conditions that the Neurosciences Unit test for include some of the Spinocerebellar Ataxias, familial Motor Neurone Disease, and familial Creutzfeldt - Jakob disease (CJD). )

Testing children does raise a number of very difficult ethical dilemmas. The guidelines followed at the Neurosciences Unit, state that children under the age of 18 are not tested. Obviously if a situation were to present itself where a 17yr old wanted testing, that would have to be considered on an individual basis.

Recommendations for the predictive genetic test in Huntington's disease

Receiving information about predictive testing is not a commitment to having the test.