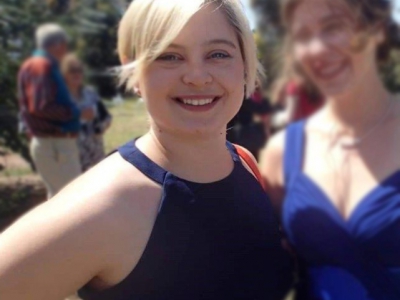 I have known about Huntington’s Disease and how it affects my family since I was about 11 years old. My grandad wasn’t very sick then. I just thought he was a grumpy old man sometimes. I know now that his mood swings were symptoms of HD.

I started thinking about testing when I was 18. I could get tested, so why shouldn’t I? It turns out that I really wasn’t ready. I couldn’t contemplate a positive result without crying.

It is important to point out that it didn’t matter what logical arguments were made. At that point, to me, at risk equalled gene positive, and gene positive meant that meaningful life ended at 50. Even Grandad’s relatively late onset age (diagnosed at 60) couldn’t put things in perspective. I kept frightening myself with my worries and kept feeding them with HD horror stories on the internet. Sometimes I’d have good days when I’d realise that it really is a 50/50 chance either way. Other days I would assume I was gene positive and no science or logic or proof could make me feel any better.

I don’t remember thinking about HD too much in 2011 – 2012. I had too much other stuff going on. My mind changed in March 2013. As part of a youth forum put on by HWA,Travis from ECU gave a talk about exciting (everything sounds exciting when Travis talks about it) new research into HD... But only people who were gene positive could participate. That did it - Up until then my pros list for testing wasn’t long enough to consider it again. I wasn’t looking at having kids or looking into a job that would exclude me based on my gene status (eg: army). Here was hope: If I was gene positive I could help myself and my family by participating in research.

I started the process in late 2013 and eventually got the results in late 2014. Just because I had made the decision to start testing didn’t make that year easy. I second guessed myself and still had the feeling that gene positive would mean that life was essentially over at 50. I remember wondering why I had bothered to start a law degree in 2013. I was still worried. I felt selfish for hoping for a negative result when there were still three family members untested. Sometimes I thought it was hopeless as my mum and both her siblings were gene positive.

I understand HD very well. But logic doesn’t play a part when thinking about something as serious as HD.

Then the big day: I’d had to fit results day in with exams and my parents’ various trips overseas. They landed in Perth from Bali about the time I was in Miranda’s office.

The first thing I did was ask Miranda to repeat the results. It didn’t make sense straight away. Then I cried and laughed at the same time. I felt like the roof had disappeared, there was no longer an arbitrary limit on me and my life. I also felt like a huge weight had been lifted off my shoulders (but with hindsight I realise that it didn’t fully disappear until a couple of weeks later).

On the drive home I was shaking. My partner and I couldn’t stop smiling. That night was the most intensely emotional night of my life. My family was simultaneously relieved about me but worried about my sister and cousins. We all cried.

After the first wave of relief had passed I found I was still worried about HD. But I didn’t like to bring it up with anyone else at risk or positive because it felt like I was rubbing it in their faces or making a problem out of a very good result. I also felt like I didn’t belong to the HWA community any more.

It took a good few weeks for the emotions to settle down. When they finally did I realised how much my test results had been on my mind for the last year. I’d be in bed waiting to fall asleep and would realise that there was an empty spot which had previously been taken up by worrying about HD and my future.