Frustration - A story by Andrew Francis 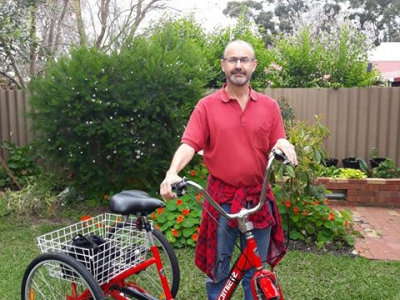 “What do you want? I thought I had made myself clear the last time we met!”

Daryl was glaring at his younger brother Steve whom he had not seen for nearly three years since he had been diagnosed with Huntington’s Disease. (HD)

“Doesn’t the fact that that I travelled all this way to see you count for something?” Steve retorted, running his hands over his greying number two hair-cut. “You can’t lock people out forever. What’s the point? First it was Mum, then Susan and now me.”

The conversation ground to a halt as the brothers regarded each other.

Daryl and Steve were both born in Bayswater, Daryl was the liveliest of the two. They were inseparable mates from day one. They played footy together and both had graduated to WAFL. They had also walked the Bibulmun track together twice and were planning a third time, when Daryl had become symptomatic with HD.

He first noticed it when he got lost walking alone on an easy part of the Bibulmun and was beginning to slip and cut himself more often. His mind flew back to the sheer panic; running with his rucksack bouncing like a leg iron and screaming out for anyone to find him. The bush had always been a place of peace and security, but now seemed more like a minefield. Fortunately, he had blundered into someone who had pointed put him in the right direction.

“Look out mate, its red!” Susan cried as he braked just in time for the traffic light. They were on their way back from holiday. The girls were asleep in the back.

They had met studying as nurses at Curtin University. He was three years older, they had spent their honeymoon together in Rottnest. They were broke, so his mother had foot the bill. Susan had got on famously well with her mother in law, who was always ready to baby sit her granddaughters. In the three years before his becoming symptomatic they were rarely out of each other’s sight.

He had a job in Charlie Gardiners that he had held down very capably. At first, he could be a bit laid back, and his manager had to have a quiet word with him twice in the first six months, but he learned his lesson and soon became one of the most professional nurses in the A.E.

After a while, he found that he had started dropping things and couldn’t remember ward procedure.

He was reluctant to go to the doctors in case he found something unpleasant, but Susan suggested that his job may be at stake if he didn’t, and a blood test showed he had HD.

At first, he was in total denial, refusing even to have the name of the disease spoken in his presence. He resigned from his job but seemed somehow reluctant to apply for another. “I’m 42,” he insisted, “who’s going to employ me if I drop things, and anyway, I can’t even drive to work now, can I?”

After a couple more near misses with the car, he still insisted he was fine. Susan had gone to the police, one of whom had come to the house saying that if he did not take a driving test, the law would take away his licence for the good of the public.

Daryl had failed the test but somehow managed to blame Susan for it, and didn’t speak to her for a fortnight.

He sat at home, glued to the TV or his computer and putting on weight. It got so bad that Susan and the girls had to move in with Daryl’s mother, Alice.

From the start of the episode, Alice had tried to be in regular contact with her son, asking him to get counselling or even see a doctor but eventually he refused to speak to her as well.

Daryl stared angrily at his brother; he wanted to blame him for not having the gene.

“Look, you can’t just turn your back on the world, can you?” Steve pleaded.

“What do you know about it?”

“You haven’t left the house for six weeks. Why don’t you just go for a walk or something?”

“Every time I do, I keep losing things, my phone, wallet or my keys. I’d find them again but while I was looking, I was convinced they had gone for good and I was terrified of having to hitch a lift home or something. It was like being lost in the bush again.” Daryl passed his hand across his eyes as though he were back on the track. “You don’t know what it’s like living with this kind of stress!”

“Everything I love doing has become a chore. Even shopping, I’d be freaked out by all the choice. You know remember that café I used to go to with the muffins?” “

“They stopped the muffins, so now I go somewhere else, and you know what I’m dreading the most?”

“What happens when they stop doing them?”

“Did you ask them to restock them? They may have listened to a regular customer?”

“Of course, I didn’t,” Daryl snapped.  “I just told them to go to hell! And now I wouldn't dare show my face there again, would I?’”

“Have you told them you have HD?” Steve reasoned. “They must have disabled people coming in.”

“There’s a lady with Parkinsons who came into our pub once. She couldn’t count her money, so she just said, “Can you help me, please, I’ve got Parkinson’s?” and the landlord did it for her. People are happy to help, if you tell them.”

“Good luck to them!”

There was a long pause.

Steve shifted tack. “You know, I’ve been reading about some people who have Parkinsons, H.D. all kinds of conditions, and they have medication to help with the stress and some have climbed the Himalaya’s.”

The stony silence from Daryl encouraged him to continue.

“That third trip on the Bib, we could still do it, all we have to do is go to the doctors and tell him all about it. I don’t understand what you are going through, you’re right, but it is only going to get worse and worse until it becomes unbearable.”

‘Could you take me to the doctors? D’