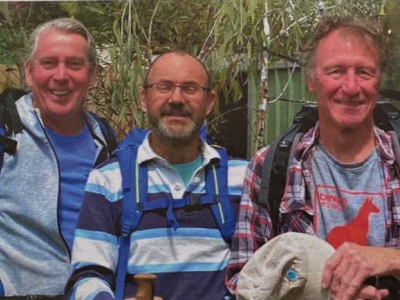 Andrew Francis has Huntington's disease but doesn't let it get in his way when he makes his mind up to take on a challenge.

The challenge this particular time was walking 60km along the Bibbulmun Track over five days and four nights to riase awareness and hopefully some donations for Huntington's WA.

The walk was jointly organised by Andrew's eldest son John, who took a week's leave as a field worker with Scripture Union to school groups to lead the walk, and behind the scenes support from Andrew's wife Sophie, a nurse.

Andrew had further support during the walk from close friends and western suburbs locals Ted Mangan and Ray Farrier.

The walk started early on the Monday from the Northern Terminus at Kalamunda and the first day the group covered the 21km to the overnight camp at Ball Creek.

Food was determined by how much weight each individual was prepared to carry in their backpack which also had to include the weight of a sleeping bag, cooking implements, small tent, washing items and minimal fresh clothes. Despite taking the bare necessities, everyone's backpack weight was more than 20kg.

The distance between the next three campsites, Helena, Waaleigh and Beraking, averaged about 9km each section, with the final push to the pick-up point on the fifth day on Dale Road of about 10km.

The walk was much harder than Ted and Ray had anticipated, not having been on the Bibbulmun Track before and particularly when the temperature soared over 30C.

Andrew was an inspiration on the walk with never a word of complaint and at home surrounded by the beauty of nature. John made sure that there were regular drink stops so everyone remained hydrated and around noon every day Andrew had the chance to rest for half an hour.

Andrew and his family have had support from Huntington's WA since 2004. One of the lesserknown charities, it works away quietly and tirelessly focused on the quality of life and dignity of the individuals and their families.